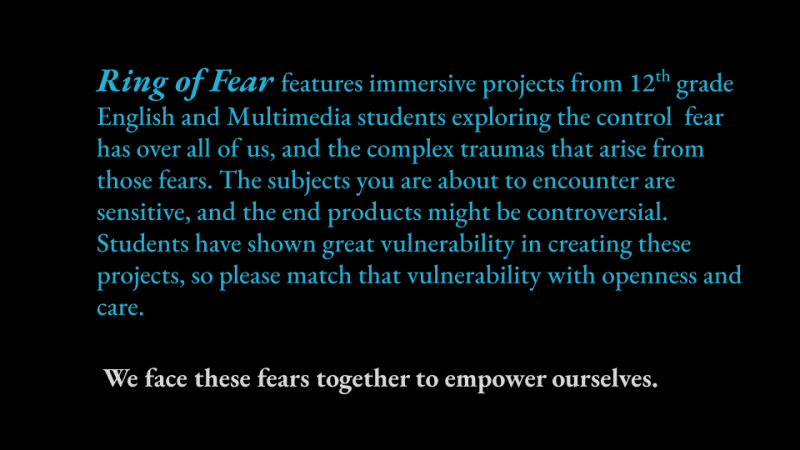 Essential Questions:
How is fear used to shape our lives and dictate our actions?
What does fear reveal about our humanity?

Exhibition:
Students exhibited a variety of performances, interactive digital works, and writings for public audiences in an arcade-styled experience. Their research and writing began in English and their interactive simulations were designed and coded in their Computer Programming class. At exhibition, the tables were arranged in a circle and the lights were dim. As audiences entered the exhibition they were greeted with a large projection of the manifesto slide shown above. This experience was powerful. Through their projects and presentations, students facilitated candid and meaningful conversations with their audiences about their challenges and concerns as emerging members of the adult community.

Due to web constraints, the full interactivity of these projects is not shown.

Fear of Deportation by G.G.

Fear of Failed Democracy by M.L.

Fear of the Other by M.C.

Fear of Atomic Bombs by S.K.

Fear of Cults by S.T.

Fear of Paranoia by M.H.

Fear of Global Warming by N.G.

Fear of Domestic Abuse by M.S.

Fear of Political Leaders by K.W.

Fear of Strangers by S.G.

Fear of Poverty by J.F.

Fear of Police Brutality by B.B.

Fear of Persecution by G.M.

Fear of Religion by G.V.

Fear of Social Media by J.F.

Fear of the Mexican Cartel by B.R.

Fear of the Grim Reaper by K.A.

Fear of School Shootings by A.Q.

Fear of Racial Profiling by C.J.

Fear of Totalitarianism by E.D.

Fear of Religious Homophobia by M.H.

Fear of Cinema by T.G.

Fear of Media Bias by S.B.

Fear of Education Discrimination by G.D.

Fear of Technology by R.G.A.

Fear of Internment Camps by A.M.