Guiding Essential Question:
Why is the promise of metamorphosis so alluring, and by what measures can a particular metamorphosis be considered a positive change?

Criteria for Metamorphosis:
For the purpose of project development and exhibition, we defined the term “metamorphosis” as a living thing undergoing a transformation that demonstrates a noticeable change in character, appearance, function, or condition, such as derived from biology, environmental science, society, cultural belief, or magic (as described in literature). Our exhibition took on its own “metamorphosis” of transformative materials when students reconfigured our school venue with cardboard boxes. Within these structures students embedded their interactive experiences and installations. 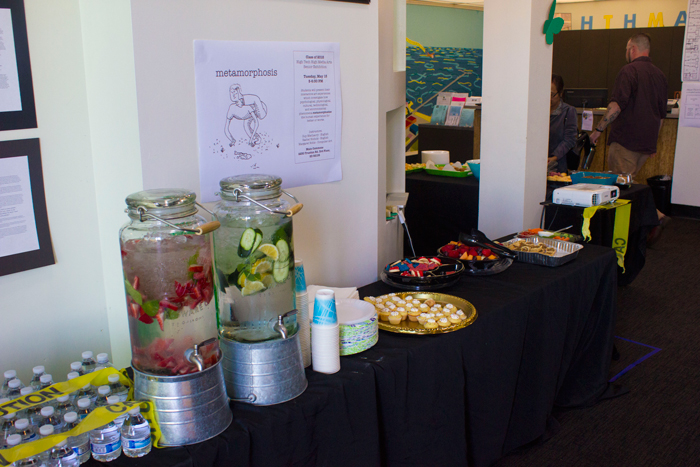 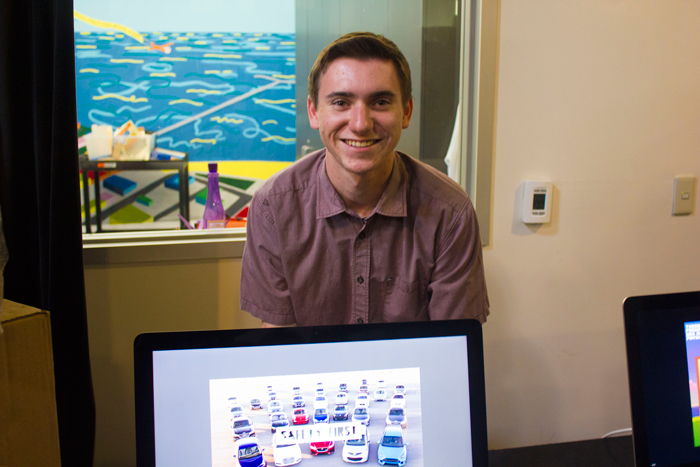 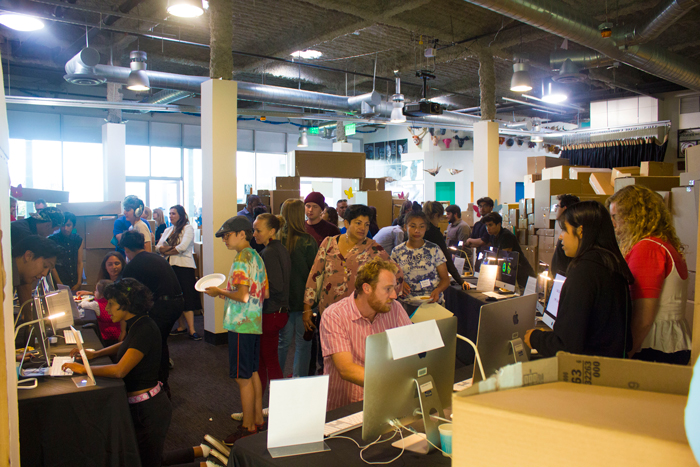 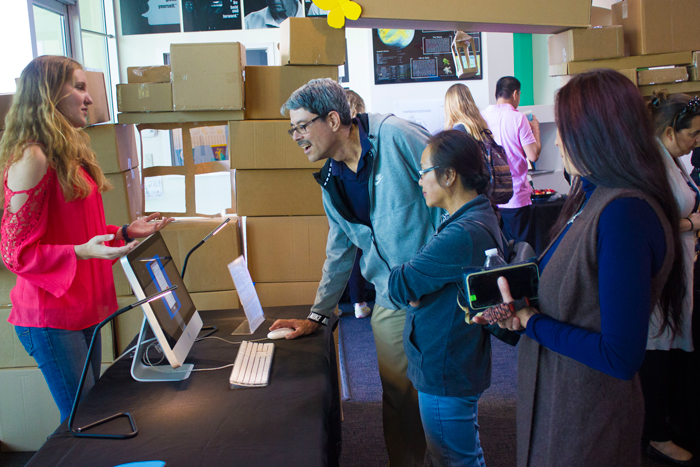 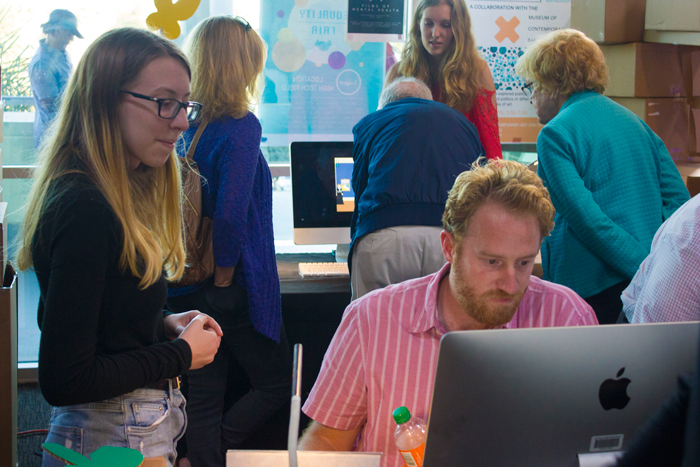 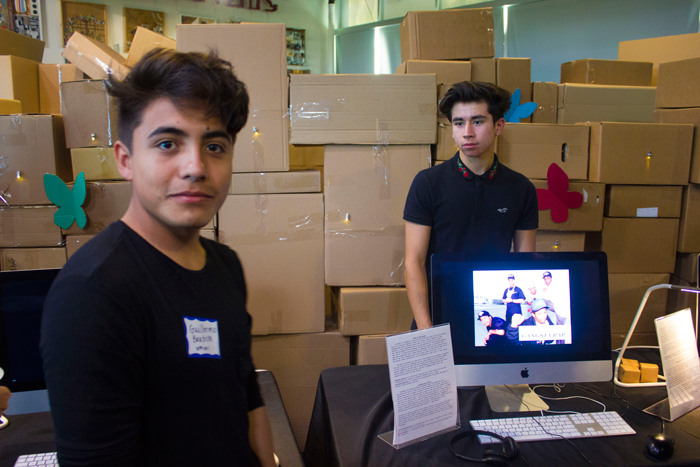 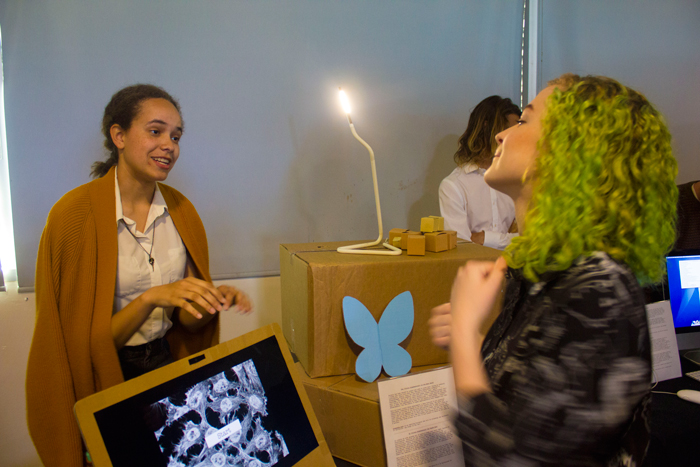 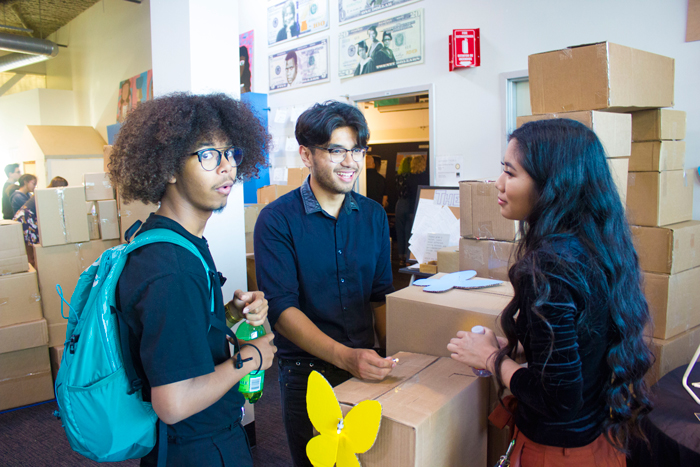 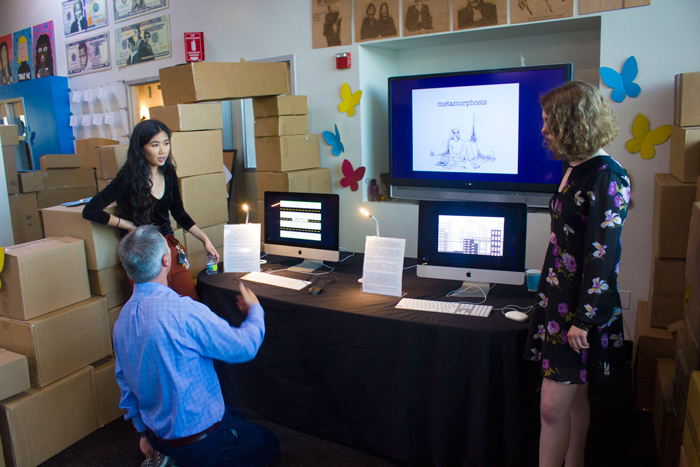 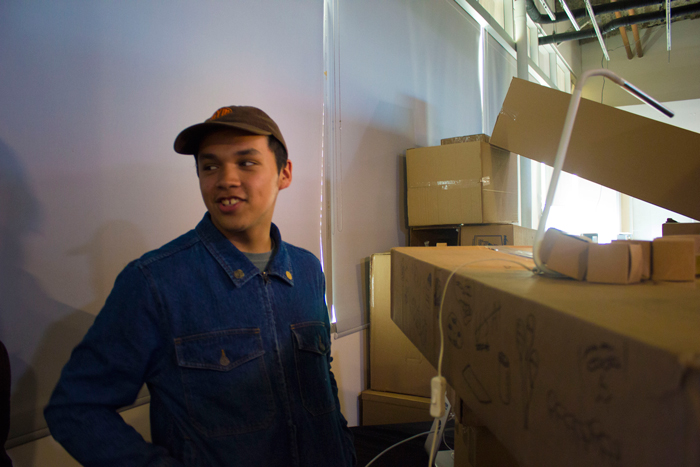 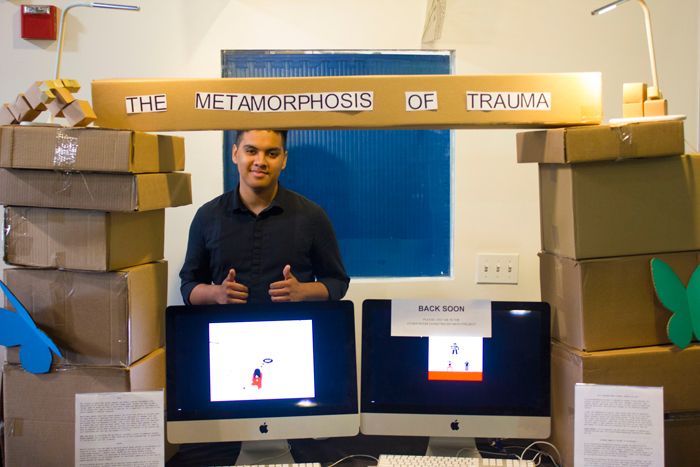 Throughout time, etiquette has been used to separate social and financial classes. The rules undergo a constant metamorphosis in order to maintain separation. Each generation grows further away from previous rules. As time goes on, new standards are put into place. The purpose of our project is to present these standards and bring awareness to the meaning behind them. We designed our game to feel unfair because it doesn’t tell you how to win. It’s meant to simulate the nature of etiquette itself. If you don’t already know the rules, then you suffer the consequences. The two parts of our game each represent a separate time period to illustrate the change that etiquette has undergone throughout time. For most people, etiquette is a set of rules we follow without fully understanding the importance or history of. Hopefully, after interacting with our program, players will feel more aware, and less likely to accept these rules and ideals without a second thought.

Created by GP and SK

Gentrification has happened a lot in San Diego. Removing lower income families of various ethnicities and replacing them with middle class families. Gentrification also happens in places all around the globe,
making it a much bigger issue than we had initially thought. Gentrification is a process that can take decades to complete, we have condensed it into a 3 minute interactive piece. In our game you play as the mayor and are tasked with saving the city from bankruptcy. You will need to make decisions to benefit the city, and you may begin to question your morals as the mayor. The shapes and colors in our game symbolically represent races of people and how they are commonly associated in the real world.

Created by CH and IQ

My inspiration for my metamorphosis project was being able to learn more about how mental and physical growth in humans continues over-time between the ages of 18 and 25 and how crucial certain aspects of this process are for the mind that develop during this time. For my project I created a game in which you can control a character as he embarks on his journey starting from the age of 18. This game explains how even though the traditional age of an adult is set at 18 years old, it is still far from being complete and has yet to fully mature. The art style that I chose for my game is pixel art in order to create a fun and interesting yet complex world for the player to look at. In order to give the player an immersive and eye-catching experience, both the backgrounds, and the character move constantly. As you go throughout the game, the main character will change physically and mentally. This is displayed in both himself and in an image of his brain floating above his head wherever he goes in the game.

Our project illustrates the citizen’s perspective on the transition period of Hong Kong between England and China. The political status of the city is uncertain and up for grabs. Our main character, Iris, symbolizes the young people’s uncertainty for their future. We illustrated the Umbrella Revolution protests that occurred in 2014 (a monumental event for the pro-democracy citizens’voices) to have a literal and symbolic representation of what is going on in Hong Kong in our project. Our black and white illustrations highlight the importance of the color yellow, used sparingly, throughout the piece to provide a clear symbol and theme to tell our story. Yellow was the unifying color used in the Umbrella Revolution, so it was the best color to highlight importance in our project. In our ending dialogue scene, we are striving to convey the relationship and difference of perspective of Hong Kong’s independence between the older generation and younger generation of citizens. The feeling of incompleteness at the end of our story is intentional, because there is yet to be a resolution in real life.

Created by CB and DC

Are you a racist? Have you noticed the metamorphosis of racism, have you noticed how it makes others than yourselves feel, well now there’s a game to show us that. When I found out that Mateo wanted to do a game about the metamorphosis of stereotypical racism I thought that the strong message we would create would translate well into a game; “we as people have grown to naturally tolerate the fact that racism is ok, but it’s only clear to see that we’ve been ignorant when the tables have turned.” In the beginning the protagonist was originally going to be black, but with critique, our teacher suggested that we make our character white so that when they are being racially stereotyped with stereotypes not of their own it will catch people off guard and the twist of the protagonist being black will take more of an affect. We wanted to bring awareness to how racial stereotypes affect races, and wanted to bring knowledge and understanding to everyone who plays our game.

Created by MG and RP

This project was inspired by our research on the history of makeup and plastic surgery. We want our audience to come in with their basic understanding about cosmetics, then to gain insight on the metamorphosis that has occurred throughout time. We would like them to come out recognizing the direct effect that the events in society have on cosmetic trends. Nancy coded the project and Zoe created the art. Together we wanted our project be continuous in design and functionality. We worked together to mesh the art with the constraints of coding to make the game user friendly and provide clear, well delivered information. Throughout our game, players will be able to design their aliens based on the makeup and surgery options that were available during certain eras, like the 1800s, 1900s, and 2000s. There will also be information about the products and why they were used at the time in relation to the events in that century.

Created by NA and ZJ

The “Victor Frankensteins” of the Real World Science has been abused by people and used to cause harm. During my research, I found that there have been many deplorable experiments conducted on individuals; usually those who were people of color, poor, and/or disadvantaged. These shameful tests were almost always conducted without their knowledge. But for all of the awful studies I found, I also noticed that they were relics of the past, long since discontinued. I found pushes for progress, ways to make the experiments as safe for the subject as possible. I found a metamorphosis- how the ethics of human experimentation have changed over time. This art piece covers three experiments, a mere fraction of all unethical experiments conducted on humans in the 20th century alone. The faces and bodies of the victims in the pictures were painted over in order to create an effect where they appeared to be an imitation of a human, which reflects the views that the scientists had on their test subjects. I hope that the audience will consider how far we have come as humans upon seeing my art piece. How we have gone from using science as a tool to hurt people to where we are today as a society.

For this project we were interested in finding out more about how humans have changed along with the progression of technology. We wanted to know if humans have become indolent as technology has automated more and more of our daily tasks. We have portrayed how technology has changed humans through the necessary task of cooking. We chose to use cooking to show the progression of technology because cooking technology has consistently become more advanced through the ages. In our project we show how cooking has changed throughout time and parallel to the cooking technologies, how the people using those technologies have changed as well. The people playing our game should think about the impact that technology has had on our lives. We want them to look at how we were different in the past and how technology has influenced who we are now. Ideally the audience will question how they have been affected by technology and we wish for them to become more aware of how technology can affect us going forward.

Created by KB and CS

Katie and I love the sense thrill, and both share passion and love for horror movies, specifically, serial killers. We are interested in how a killer metamorphosizes. Instead of focusing on serial killers we focused on forensic science, and after we discussed how we would structure the project, we finalized the idea and started right away. We used photography and photoshop to add a black and white filter, and many after effects to make the actor look like an actual victim. Using this tactic, we hope the audience is immersed in the game, and feels like an actual forensic scientist. From there, We added facts that not only supplemented the game, and the players knowledge as well. We hope that through this game, the players understand the great advancements forensic scientists have made, and how important each of those advancements are.