How do lines that are physically built or imaginary, divide us psychologically, socially, and economically?

For this project, students were asked to investigate real and imagined lines that divide identities, communities, and resources. Each student in the class selected their own unique research topic based on ideas and experiences that were personally connected to their lives and interests. Topics ranged from physical and geographical lines such as the natural environment and architecture to personal lines of identity in race, citizenship, gender, and neurodiversity.  For this curriculum, students were also inspired by the books: You Are Here and The Map as Art (both by Katharine Harmon). After research, discussions, and independent mind map activities, students produced animated artworks and interactive infographics using the programming language Javascript (p5js). Due to the Covid-19 quarantine, all work was done remotely with open source tools. Most students were first-time computer programmers. This is their virtual exhibition!

Can Two Cultures Share One Mind? by Ajok Thon 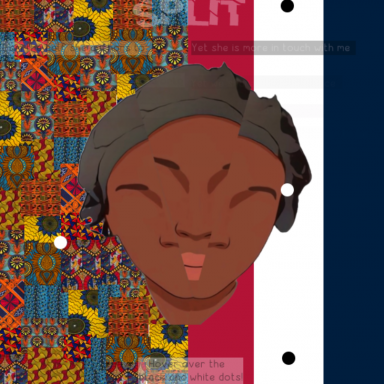 The Rise of Racism During the Pandemic by Aidan Morales 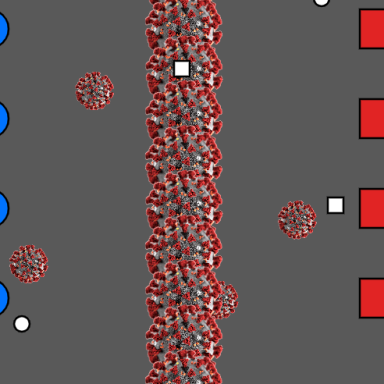 How has COVID-19 amplified racism against Asian Americans? In December of 2019, the first case of COVID-19 appeared in Wuhan, China. By March of 2020, the virus had spread around the world and declared a pandemic. Along with it came widespread racism against Asian Americans. As an Asian American, I face the same struggles people like me do in this country. While I personally haven’t experienced any racism related to COVID-19, it can and does affect me. My project is an interactive experience that allows you to see how the spread of COVID-19 caused some people to show their true colors as racists. After spreading COVID-19, you can learn information on how Asian Americans were affected by the actions of racists.

The Language Divide by Bryah Odom 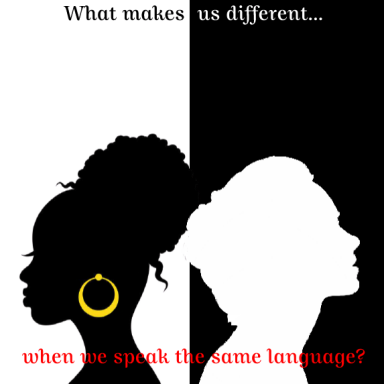 For this project, I wanted to explore the barrier between AAVE (African American Vernacular English) and Standard English or English in the way that many people believe it is supposed to be spoken. While both are valid ways of speaking the English language, AAVE is often considered the wrong way to speak it and Standard English is considered the proper way. This topic is important because when Black people enter spaces at work, or school, or on everyday visits to the store they often are ridiculed for the way they speak even though there is a historical reason why Black people speak what would be considered “broken English”. For Black people this language is a dire part of our culture yet we do not receive praise or acceptance when we ourselves use our own language. Over several years our version of English has been predominantly been used by white people who treat it as a trend and directly benefit from using our language while we are seen as nothing more than ghetto and unprofessional.

An Icon of Inequity by Maya Jimenez 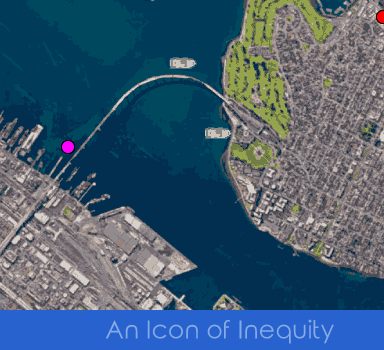 The Coronado bridge is an icon of San Diego. However, its origins reveal inequity and are a representation of the major differences between how it has affected its two sides; Barrio Logan and Coronado. My map aims to clearly show the audience disparities between the two communities. This topic has intrigued me ever since I learned about the symbolism of a border such as the Coronado bridge, a beloved architectural barrier with a controversial past. Since then, I have always wanted to create a project that explores the two sides of the bridge. I sought to highlight the clear divide between the two communities in a way that was unique and informative. 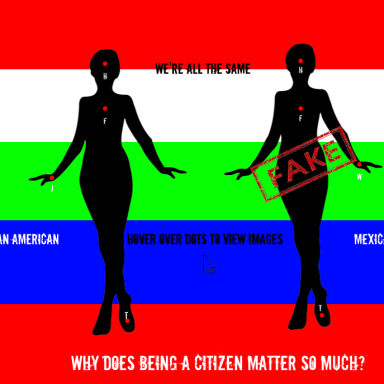 Why does being a citizen matter so much? The subject that I am focusing on is more of a personal subject (the difference between being undocumented versus having American citizenship). This subject has always been something that I think about because my family and I are deeply affected by it. Because of my experiences, I view things differently than others might. 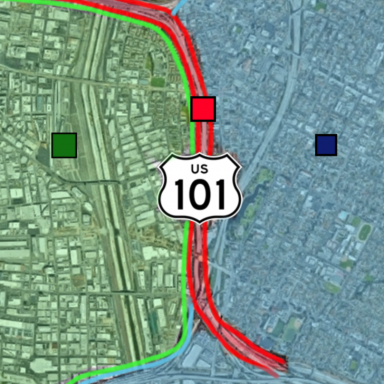 Why does architecture that was made to serve people, end up hurting people? My project shows the 101 Highway through the Boyle Heights neighborhood in Los Angeles which displaced many African Americans in the 1950s. The creation of this structure has led to redlining, disproportionate household incomes, and a lowered quality of life for those affected. This topic matters to me because this is an untold story and we often overlook the architecture we use every day without seeing how it affects people.

Europe’s Only War Zone: Why isn’t this seen? by Samuel Aguirre 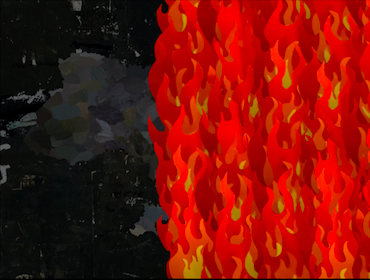 At the end of 2013, Ukraine’s president Viktor Yanukovych rejected a trade association agreement with the European Union and instead took up an agreement with Russia which sparked mass protests that eventually turned violent in Ukraine’s capital Kyiv.  Pro Russian separatists, Eastern Ukrainians with Russian heritage, formed the Donetsk People’s Republic (DNR)  and seized the capture of Luhansk and Donetsk—declaring themselves independent from Ukraine. Ukrainian military forces and rogue militia groups fought to take the region from the DNR but they had support from the Russian Military—fueling the war that continues to this day. When I first came into this project, I had never even heard about the Euromaidan Revolution or the war in Eastern Ukraine. When I discovered it, I was awestruck as to how I had never heard about this given the severity of the conflict itself and how recent it is. It felt important to me that I shared this issue with others who might’ve also never heard about this conflict, encouraging them to do more research into it and other recent conflicts that might be flying under their radars. 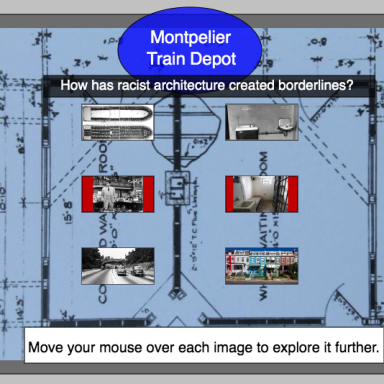 My project focuses on the connection between racist architecture of the past and the effects it has on people. The Montpelier train station built in 1910 had two separate entrances and waiting rooms, one for “whites” and one for “colored.” I explore this and many other related examples throughout history. 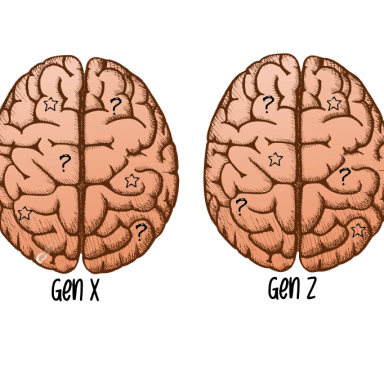 My project explores why generations X and Z are so different. These two age groups have many opposing views on different world events, especially political moments. Personally, I’ve encountered many teenage friends who were not able to connect with their parents because of how different their lives and ideas were. I think that is very unfortunate because both sides have much to offer each other. 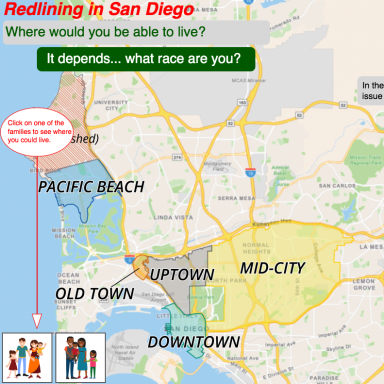 My project highlights redlining in San Diego during the 1930’s. This practice exemplifies structural racism and systemic inequities through real estate access. My project shows where minorities were confined to live and the neighborhoods they were restricted from moving to for fear of “ruining the area.” This topic matters because many think of San Diego as a diverse and integrated place that was welcoming to all. This was not the case. Telling the real story is important to create awareness and vigilance. It is imperative that-don’t let history go on without being acknowledged.

San Diego Homeless: Who Gets Basic Necessities? by Natalia Castro 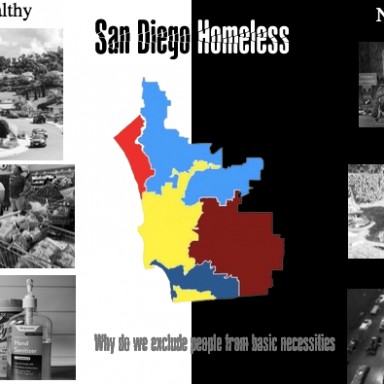 I wanted to focus my project on the borderline that splits people between being homeless and having a home here in San Diego. This topic is very important especially in these times because most of the homeless don’t have the necessities they need to stay healthy. I split my map in half to show a clear borderline by adding images that compare the two lifestyles.

Binary vs. Non-Binary by Avi Ritchie 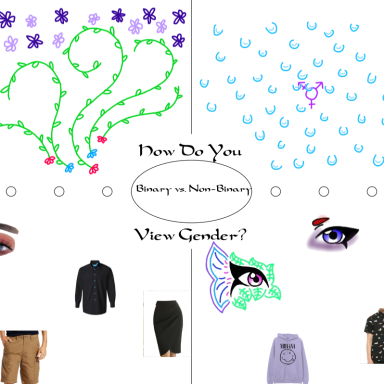 This art project encompasses how I view Binary vs. Non-Binary in a social and physical way. As someone who’s a part of that non-binary umbrella, being gender-fluid, it feels like society tries to push that I’m not valid, that my gender doesn’t exist so that I should just be binary. It makes me sad that other people of the non-binary community have to go through that as well.

Map of the Mind by Angel Aguilar 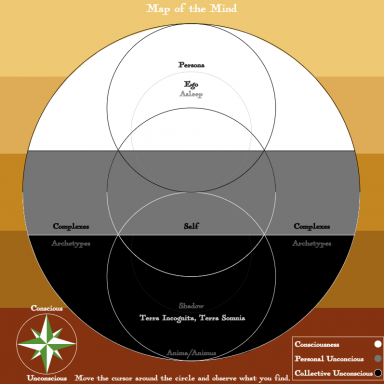 The project is based on how Carl Jung describes the mind, being divided into the consciousness at the top, the personal unconscious at the middle, and the collective unconscious at the bottom. Within the parts are shapes or figures representing aspects of the mind that Jung commented on. This topic is personally important to me because it can be a way to help people understand themselves better.

California: Why is There a Divide? by Corbin Drey 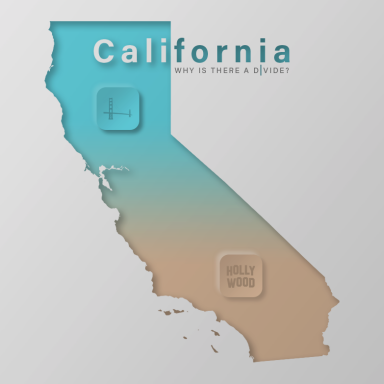 If California is one state, why is there a declared divide of so many differences between north and south? I believe this to be caused by the dead zone in the center that acts as a mental border between the two halves. I think it is something that is unnoticed, and it matters to me because I have closely interacted with these differences. 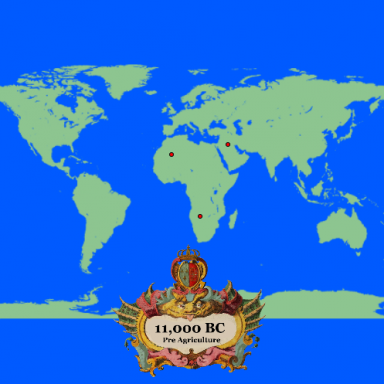 How has the invention of agriculture affected our species? The subject of my project is the development of society and how it both guards and separates us from nature. It is meant to compare the two worlds of past and present through the borderline of time. 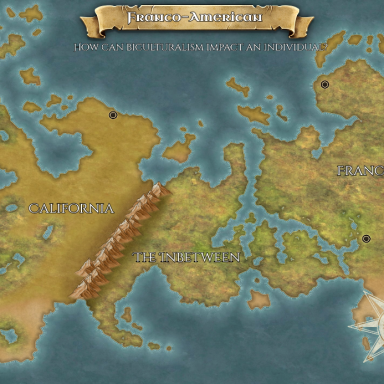 How can dual identity can impact an individual? The subject is about dual identity and the mixture of culture. Many people experience this duality and it is important as some may struggle with their identity as they wrestle with which side they belong to. This map is based on my personal experiences as a bicultural person, and how different cultural influences shaped me.

Tradition versus Innovation by Mason Jones 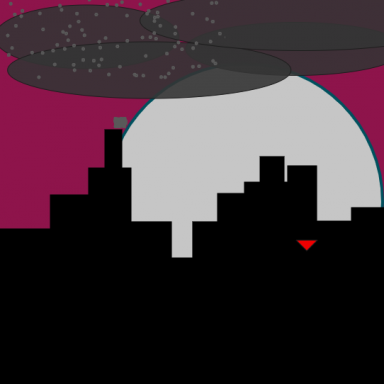 This project showcases the differences of two lifestyles — two extreme lifestyles.  One side is based on a traditional way of life (such as the Amish) and the other side looks at a technological, post-industrial world.  While I have nothing against technology or innovation, I think it’s important to realize that with every improvement there can be good and bad. Personally, I think it’s important to value nature and to value at least some simplistic living because it’s what we were designed to do as humans. 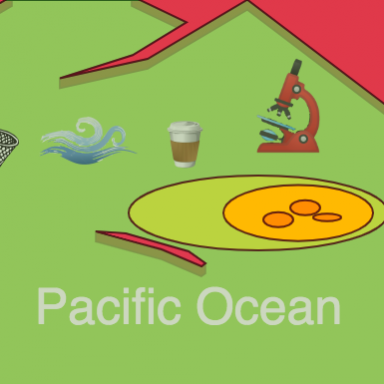 The vast majority of the Pacific Garbage Patch is made of rigid or hard plastics which are non-degradable. This marine debris litter ends up in the ocean, seas, and other large bodies of water.  When sea turtles are in the garbage patch about 75 percent of their diet is plastic. Over 1 million animals including turtles die because of plastic contamination in the ocean.

How Does the Border Hurt Wildlife? by Miu Culham 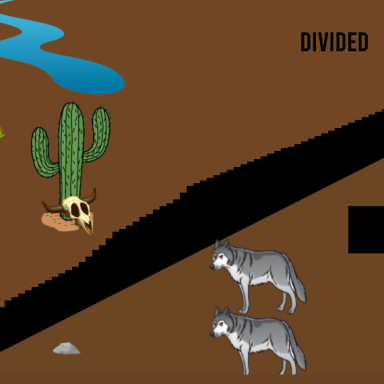 My topic is about the wildlife that dies each year from the man-built environment of the Arizona/Mexico border. This part of the border is problematic because the native wildlife needs to cross over it to get food, water, and to mate. This topic matters to me personally because I also live in a border town (San Diego). 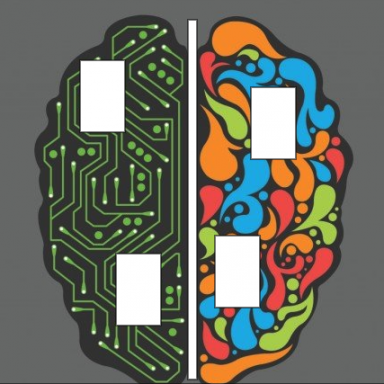 Many neurodivergent people that I know have issues with accommodation, communication, and getting their needs fulfilled. Often others aren’t helpful or want to erase their problems. As a member of the neurodivergent community, I care a lot about these people and I want to raise awareness to help members of this community. 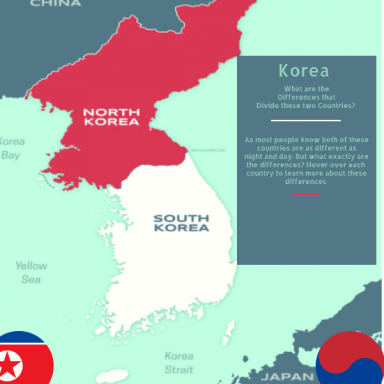 My project explores North and South Korea and its many differences. I’ve always found the duality between the two countries surprising. It’s unfortunate to learn that the citizens of North Korea live under such restrictive and troubling conditions. I know I won’t be able to solve these issues but I at least want to spread some information regarding them.

Industrialization of Nature by Julius Schoch 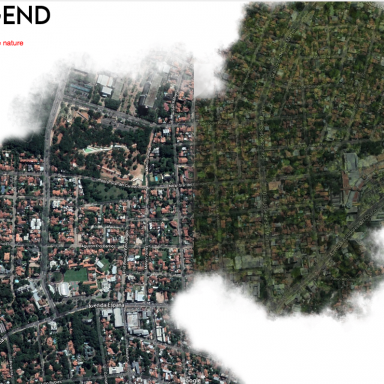 How does greed destroy the environment? Over the last few decades, the world has been getting warmer and people have been expanding on top of and destroying natural resources. This art project is important to me because if we keep on this same path then we will lose the world we once knew it. As Earth’s main inhibitors, we need to take care of her.